BIRMINGHAM, UK: Members of Britain’s Conservative Party on Saturday vowed to raise their voice against the ongoing oppression of the people in Indian Occupied Jammu and Kashmir (IOJ&K) in the British Parliament.

Speaking at a conference organised by the Tehreek-e-Kashmir UK at Dudley Council Chamber in Birmingham, Conservative Party politician Marco Longhi said that the people of the occupied valley should be given their right of self-determination.

“Indian oppression in occupied Kashmir should end and the Kashmiris should be given their due rights,” Longhi said. “Will not only talk about Indian clampdown in the region inside the British parliament only but also outside it,” he added.

The parliamentarian further added that it is a humanitarian issue which should be resolved according to the will of Kashmiri people.

“Respecting the wishes of voters in Dudley, I would expedite efforts to resolve the Kashmir issue permanently,” Longhi vowed.

Speaking on the occasion, Altaf Ahmad Bhat, the president of Jammu and Kashmir Salvation Movement (JKSM), said that the protest staged against Indian atrocities by “100 British-based Kashmiris and Pakistanis holds greater importance than a crowd of 100,000 in Islamabad and Muzaffarabad”. 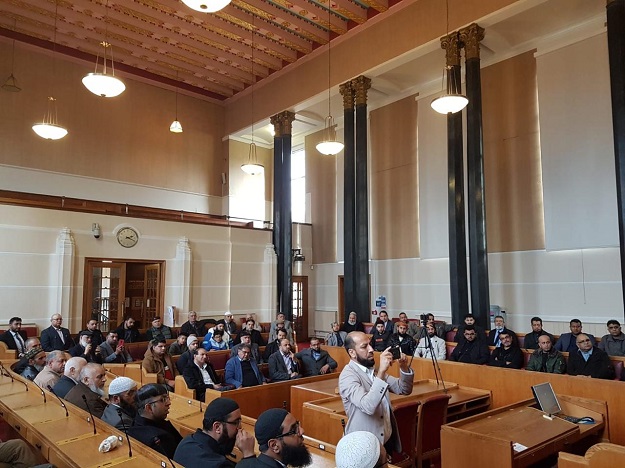 A view of a conference organised by the Tehreek-e-Kashmir UK at Dudley Council Chamber in Birmingham.

The Kashmiri Hurriyat leader further said that the people of the occupied region are asking for their rights.

“The world talks about human rights all the time but is silent when the Kashmir is discussed,” Bhat said, adding that the world would have to end its dual standards.

“India has lost its control of Kashmir and will have to leave the region soon facing a lot of disappointment,” he said.

Raja Faheem Kiyani, the president of TeK UK, stressed that there are over 12 United Nation resolutions on Kashmir.

“Britain including various democratic forces of the world should play their roles in helping Kashmiris to get their right to self-determination,” Kiyani said.

Muhammad Ghalib, the president of TeK Europe, said that Kashmiris are becoming a victim of Indian state terrorism, adding that the world community must play its role to end the Indian oppression.

Deeply saddened and hurt to know about the Road accident at…