Kashmir Committee Chairman Syed Fakhr Imam reaffirmed that peace is not possible in the region without resolving Kashmir dispute according to UN resolutions, saying that “Kashmir and Pakistan are intertwined together”.

“Protests against [Prime Minister] Modi are spreading across India as a result of his extremist policies. Modi has buried democratic values,” Imam expressed his views while addressing the seminar – Peace in South Asia: Prospects & Challenges – organised by Jammu Kashmir Salvation Movement in Islamabad on Friday.

Censuring New Delhi’s brutal clampdown since August 5, President Tehreek-e-Kashmir UK Raja Kayani said that India has shown to the world that it is the worst form of democracy by eliminating Article 370 and 35A.

“This struggle is in line with the UN chartered Kashmiris demand their birthright till Kashmiris get freedom and it will be continued until Kashmir is liberated from India.”

While providing a brief report about the struggle of Tehreek-e-Kashmir (TeK) UK Raja Fahim Kayani said that the TeK UK is playing its vital role in the diplomatic and international frontiers of the United Kingdom movement.

“There have been protests in which thousands of people have participated against Indian atrocities and in favour of the besieged people of Indian Occupied Jammu and Kashmir,” he said.

“We must build confidence in ourselves. We must go ahead with confidence. The world wants to hear now. The world talks about India with extremist policies. international newspapers, magazines and TV channels are now exposing the Indian fascist government to the world.” 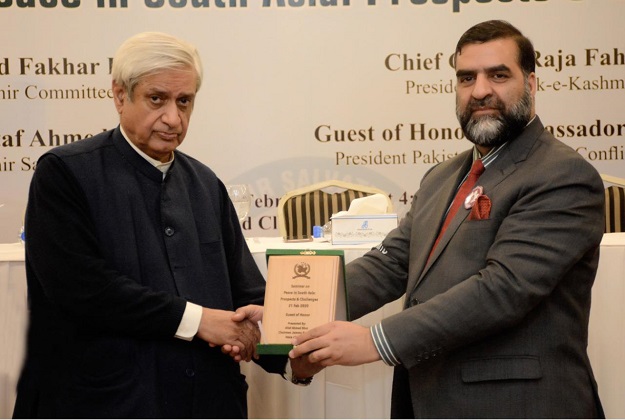 Jammu Kashmir Salvation Movement President Altaf Ahmed Bhat, host of the seminar, said that there is talk of peace in the world today that all disputes are being resolved through peace, while 72 years ago in 1948, the UN after the ceasefire gave us hope that there would poll in Kashmir – and that peace and negotiations would be talked about at the moment, but the Kashmiri nation has been betrayed for the last seven decades.

Describing the hegemonic agenda of India under Narendra Modi Amit Shah and Ajit Doval, Bhat said that India wants to become the greater hegemony in South Asia while trying to engulf Kashmir but without a solution to the Kashmir issue, the dream of peace in the region could never be achieved.