Thousands of British Kashmiris staged a strong protest in London, UK, to protest India against the rising human rights violations in Occupied Jammu and Kashmir. Kaynak: A POWERFUL PROTEST IN LONDON: ‘FREEDOM FOR IOJ KASHMIR!’

With the lead of the Tahreek-e- Kashmir’s UK President Mr Fahim Kayani, the other respectable Protesters from across the south and north areas of the UK have gathered in front of the Indian High Commission London Building, chanting pro freedom and anti-India slogans. 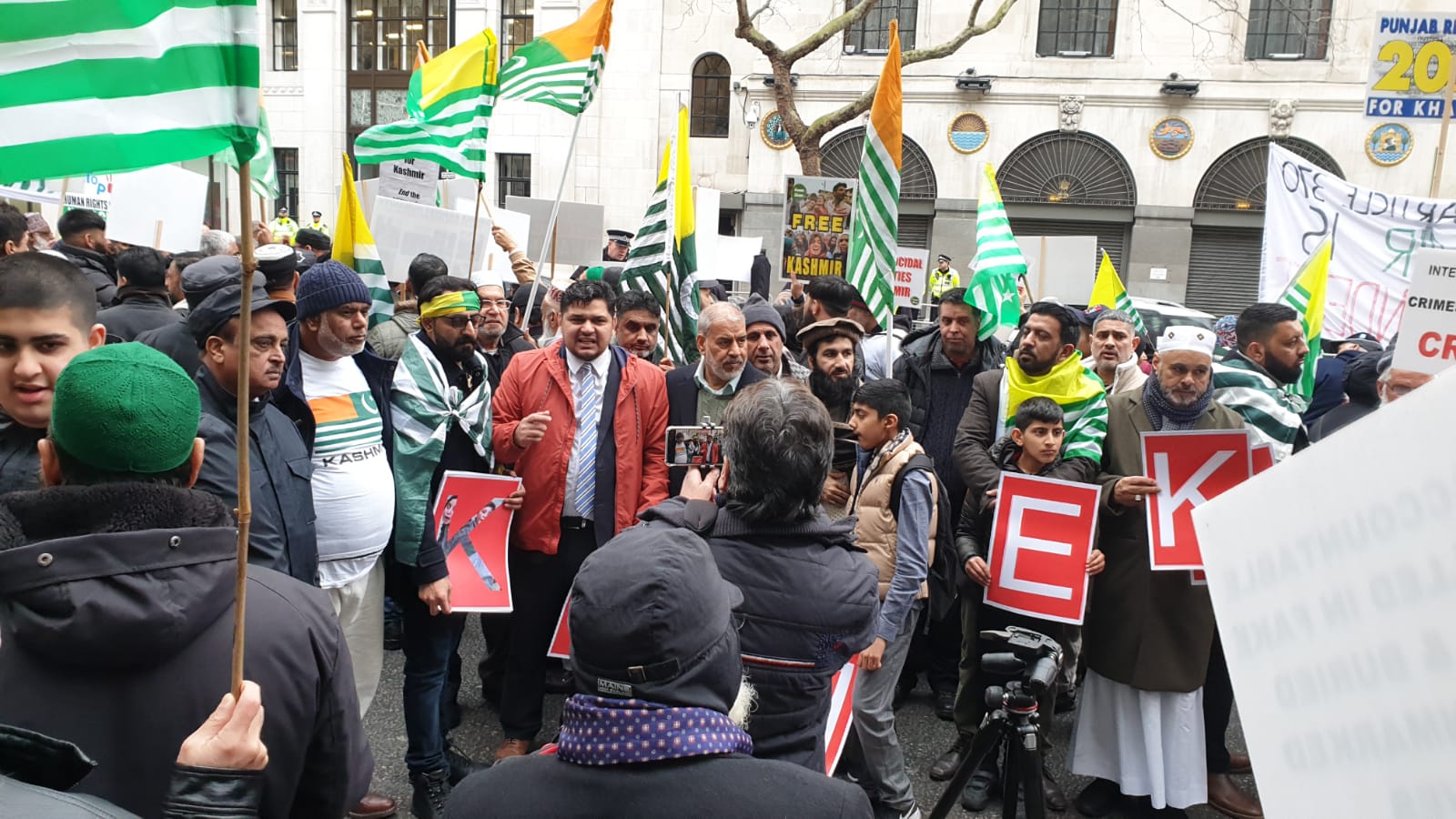 During his addressing the crowd, the President Tehreek-e-Kashmir TeK UK Raja Fahim Kayani pointed towards the Indian High Commission building and outlined the landmark with stating ’This building is the symbol of salary and violent face of so-called Indian democracy!’.

Continuing to his powerful speech Mr Kayani reminded everyone about the important matter once more: “When the people of Indian Occupied Jammu and Kashmir (IOJ&K) have no access to the basic right of vote and internet usage and in such environment India’s Republic Day is a bid to hoodwink the world community. India is not a democracy; but it has put the democracy in danger since the abrogation of Article 370 that gives the special status to the IOJ&K. It is India that snatched the statehood, flag, constitution and autonomy of Kashmiris and now Modi government is working to convert the only Muslim Majority state of Indio into minority to settle outsiders in IOJ&K!”.

With the presentation, both leading representatives Mr Kayani and Mr Yaseen, have once more appealed to UK’s Prime Minister Johnson, asking ‘to use his official role to end the siege of IOJ&K that has been laid by the government of India, towards converting the Muslim majority into minority’.

During the widely attended London protest, TeK UK explained everyone about, ‘How the people of IOJ&K, their families and the peace representatives from all around the world come out to oppose a fascist, caste conscious regime that has caged millions of innocent people in IOJ&K’. Again with the same statement, an important fact had been reminded about ‘The Second World War and how the Kashmiris gave their blood and stood up against fascism’.

While addressing the massive crowd which gathered in Downing Street, the TeK memorandum marked the 26th January 2020 ‘as the 175th day, since Narendra Modi’s government illegally revoked articles 370 & 35A which granted special status to Jammu Kashmir- in effect annexing Jammu Kashmir and breaching all the United Nations resolutions on the disputed region’. During the memorandum also being added that ‘Ladakh, in IOJ&K, is an eco-sensitive region that has been turned into a union territory directly under the control of Modi, with no state assembly. A disputed and occupied territory. This strategy will then be employed in other parts of India to take away people’s land. The beauty of this region known as `paradise on earth` is being destroyed due to the seven decades long occupation’.

Since the curfew has been imposed in Jammu Kashmir, Kashmiri civilians, the entire political leadership and politicians -those seeking union with India and Freedom from India- have been arrested, detained; the male youth have been detained during night raids and the women have been subject to rapes as well as sexual assaults. Up till today, the ill are unable to gain medical access, many have died due to lack of medical care, with many continue dying in hospitals due to the communication blackout. Furthermore, the charities are unable to provide relief to IOK.

In addition to recent developments, UNHRC reports of 2018 and 2019 do state horrific human rights violations by Indian Army. Neither Journalists and human rights organisations nor foreign politicians have been able to gain access since the Curfew in IOK.

Up till today IO Kashmir has become invisible from the inside to the outside world.

Declaring the 26 January, Indian Republic Day as ‘Black Day’ the TeK memorandum marked the importance about ‘around 700000 British Kashmiris and representatives of those seeking Justice for Kashmiris do request that, the Prime Minister of UK -which is a member of the United Nation Security Council- to prioritise justice whilst taking United Kingdom`s moral obligations and humanitarian links to consideration for the sake of humanity’.

The protesters in London, demanded from the UK prime Minister Boris Johnson ‘to have an immediate dialog with the Government of India in order to lift the ongoing curfew in the IOJ&K region; to reinstate articles 370 & 35A and to permit independent UN observers access to IOJ&K’.

During the peaceful gathering on the central London the humanitarian protesters pointed out one more time declaring ‘Kashmir dispute is an international issue; Justice for Kashmiris is responsibility of the international community and UK has a long-standing moral obligation to help in resolving this problem’.

Kaynak: A POWERFUL PROTEST IN LONDON: ‘FREEDOM FOR IOJ KASHMIR!’

Detained Hurriyat leader’s kids appeal for release of their…

Burhan Wani Day was marked by hundreds of British…